Back to a normal episode this week after last weeks craziness. Don and Ted come knocking up against each other, as was of course destined to happen, with Peggy thrown into the middle of it. This poor girl has complicated relationships with the two of them, and they both spend the episode trying to push her into the template they have of her, each one considering her their ‘protegé’, and both seeing her as a different sort of person. And say what you will, I kinda like Ted. Certainly more than Peggy’s annoying boyfriend, who became her ex-boyfriend by the end of the episode. Time to get with Ted.. Ted! Ted! Ted! (Boyfriend got what he deserved at the end of the episode anyway!) By the end, Peggy somewhat loses the connection she feels she has with either one of them. She ends the episode precisely 3 times lonelier than she started.

My request from last week was fulfilled with Don and Betty sharing some screentime, and appearing to be a happier family then they ever were when they were playing happy families. The timing is just a little too perfect. Betty is back to her skinny old self and doing a little flirting with another man at one of Henry’s shindigs, and of course Don is recently single (except for his wife of course, but that doesn’t count). Could his next affair be with his ex-wife? Well it turns out that yes he is. At least be an original spin on the ‘Don likes to have affairs’ storyline. But it might just have been a nice way to contextualise their recent discontentedness with life. Whether it goes any further remains to be seen. It doesn’t look like it though – as again we see a woman taking the power in the relationship (or lack of).
For Don also, it pretty much proves that his attraction is nothing to do with the actual people, but rather just what role they play in his life. Wife? Eww gross. Not my wife? I LOVE YOU LETS DO IT! (Either that or he was just waiting for Betty to get her figure back). 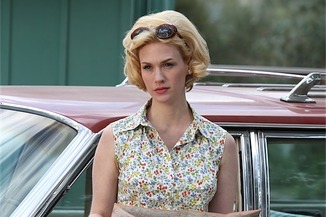 I guess its interesting to see Don functioning without being in a particular arc. He’s finished his last affair and just plodding along at work. For once its hard to guess what he’s going to do. Although it would have been a safe bet to say it would probably involve sleeping with someone who is not Megan. Betty sums up Don in the incredible line, as she refers to Megan: “She doesn’t know that loving you is the worst way to get to you.” Ah well. Poor Megan. She’s getting some sexy offers herself from her boss’s wife at work (from the couple who previously tried to organise a threesome with her) so I guess that’s a silver lining for her. At least by the end she was honest to Don about their relationship. Maybe that’ll help. Maybe Don’s had enough knockbacks to spur him into getting his priorities back on track.

Meanwhile in the office, poor old Pete Campbell (my favourite character by a long stretch) is feeling underappreciated at SCDPCGC, partly because he is one of the only members of staff that isn’t mentioned in the name of the company. He visits Duck ‘whatever he’s called’. It seems that along with Bert Peterson they may be forming an little unholy trinity. I don’t think I could even handle Duck and Bert in the same scene. Bleeeurgh.

This week in Bob Benson news:
Bob and Joan appear to be an item.
Bob is wearing funny small shorts.
Ha ha Bob.
Bob with a nurse recommedation. Bob is excellent! Love this guy Bob!

PS. No Ginsberg or Beard Guy. For shame.

If you enjoyed this Mad Men Season 6 Episode 9 review, then you might like to check out our Mad Men reviews next week after you watch Mad Men online!