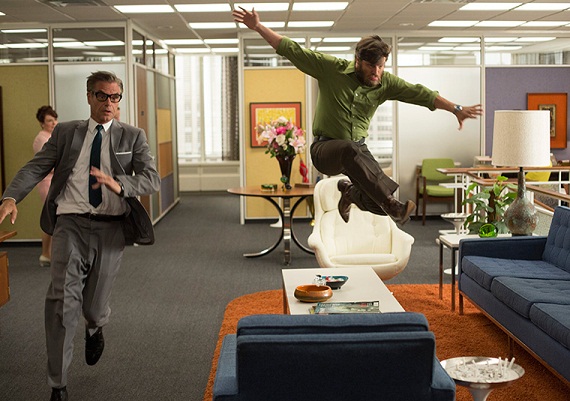 Half way through Mad Men season 6 episode 8 I began to wonder if they’d got Terry Gilliam or David Lynch in as guest director (they didn’t). Bizarre conversations, hard to read emotions, non-sequitors, jumping timelines and ye olde flashbacks. The scenes in SDCP-CGC (or whatever they are going to call it) were not unlike the dream sequences from The Sopranos. The entire effect was one of unease throughout the whole episode.

The reason for everyone acting so strange in this episode is partly explained by the CGC Stirling-equivalent guy (never picked up on his name) bringing a ‘doctor’ in to inject everyone full of some sort of crazy vitamin/speed juice – leading to the everyone in the office running around like mad folk talking gibberish. It does lead to one of Don’s best ever entrances, and Kenny’s dancing is undoubtedly going to race up the You Tube charts of most watched Mad Men scene.

Don continues to be a little bit pathetic, following the age old Don tradition of only wanting what he can’t have, spending his time outside the office loitering about outside his ex-mistresses apartment, and spending his time inside the office sweating and working extra hard to find the answer. Not the answer to the advertising campaign, but rather, it seems the answer to winning back the woman he thinks he loves. The crazy pace of the episode only stops 5 minutes from the end when Don arrives home to discover Betty, Henry and the police in his apartment following up a robbery. Faced by all this and a butt-ful of drugs, he does the only sensible thing he could – collapse unconscious on the floor.

Even though it was only for a brief moment, it was nice to see Betty and Don in the same scene for once. For many seasons now I’ve been expecting Betty to come back into the story a bit more. I guess I’ve been a little confused as to why we are still following her storyline with Henry. It doesn’t seem strong enough to stand on its own so far removed from the rest of the story.

The rest of the episode is filled with more flashback story to Don growing up in a brothel and ‘losing his cherry’ to one of the prostitutes, leading to a savage beating with a wooden spoon once his mother (or guardian lady) found out. Perhaps a little insight into the formation of Don’s psyche there. Anyhow, overall this episode just felt like filler to me – almost as if the whole thing was a build up to Don’s final line “Every time we get a car, this place turns into a whore house”. Cue whorehouse honkytonk piano. Hmmm its cute but not good enough for a whole episode worth build up.

If you enjoyed this Mad Men Season 6 Episode 8 review, then you might like to check out our Mad Men reviews next week after you watch Mad Men online!