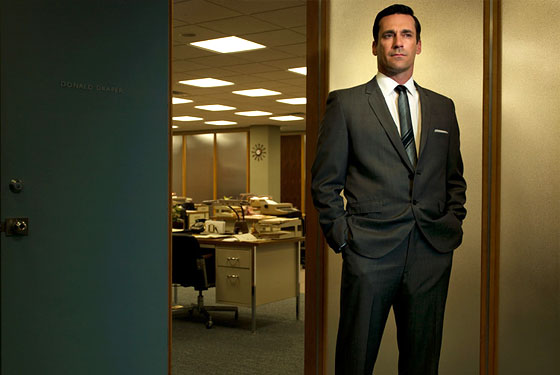 What can you say about Don Draper? The undoubtedly gifted, mysterious ad man often shocks and surprises with his thoughts and behaviour. At times you love him, and at times you hate him (both with good reason). I remember first watching Mad Men and there were split opinions as to whether he is hero or anti-hero. Basically, the man provokes debate.

However, there is one element to Don that everyone can definitely agree on. The man knows how to dress.

With the popularity of AMC’s Mad Men, the style of a sharp-suited, well tailored man has been revitalised, in a way that both women and men can get on board with. Mad Men suits are once again back in fashion. Here I will break down some of the key elements to Don Draper’s style, to help keep you one step ahead in the style game.

This is Don’s signature look – the classic American suit. Certainly amongst the partners, most of the Mad Men suits are variations on the classic American look. They are broad and thick in the shoulders, and tapered in the waist to give a V-shape. This projects masculinity, confidence and dominance – key virtues of the business man. His trousers are usually worn high and are well tailored. In terms of colours, Don will usually opt for something around a slate grey. Don usually had slim lapels, a slender tie and a neatly understated pocket square – just a thin white line of cotton. Simple and effective without drawing attention to itself, Don’s suit says as much about style as it does about the man himself.

Remember that Don is an advertising guru. He knows the importance of style in selling a product, and he clearly applies that same logic to his own appearance. When presenting a pitch to a company, he isn’t just selling them his idea, he is selling them himself. ‘Don’ is the real product he needs people to buy, and he knows exactly how to present and package that product to make it as appealing as possible. This is a canny way of thinking, and something you should take into account when deciding on your own style. What is it you are trying to sell? What is the product? Who are you, and how can you best present that through style and appearance.

Mad Men suits are currently enjoying prominence in the world of fashion, from the catwalks to the high street. Most men’s clothing stores now will have well tailored suits, thin lapels, high trousers, all receiving inspiration from Mad Men and Don Draper (like this Brooks Brothers suit for example). Although to really achieve the look, you need to make it as genuine as possible. It’s unlikely that Don just pops into Target and picks up his suit. Far more likely is that he has them tailored and fitted by professionals. Each suit is a one of a kind masterpiece, and luckily there are many tailors offering this service now (such as Henry Herbert) To look as good as Don, I highly recommend you check it out. 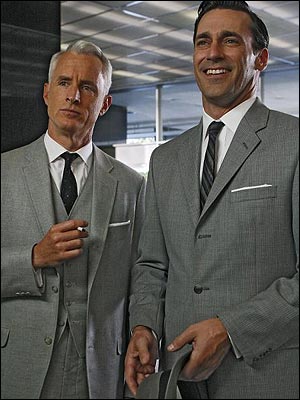